Home / Unimed News / UNIMED: election of the new President and the Board of Directors at UNIMED General Assembly 2018

UNIMED: election of the new President and the Board of Directors at UNIMED General Assembly 2018 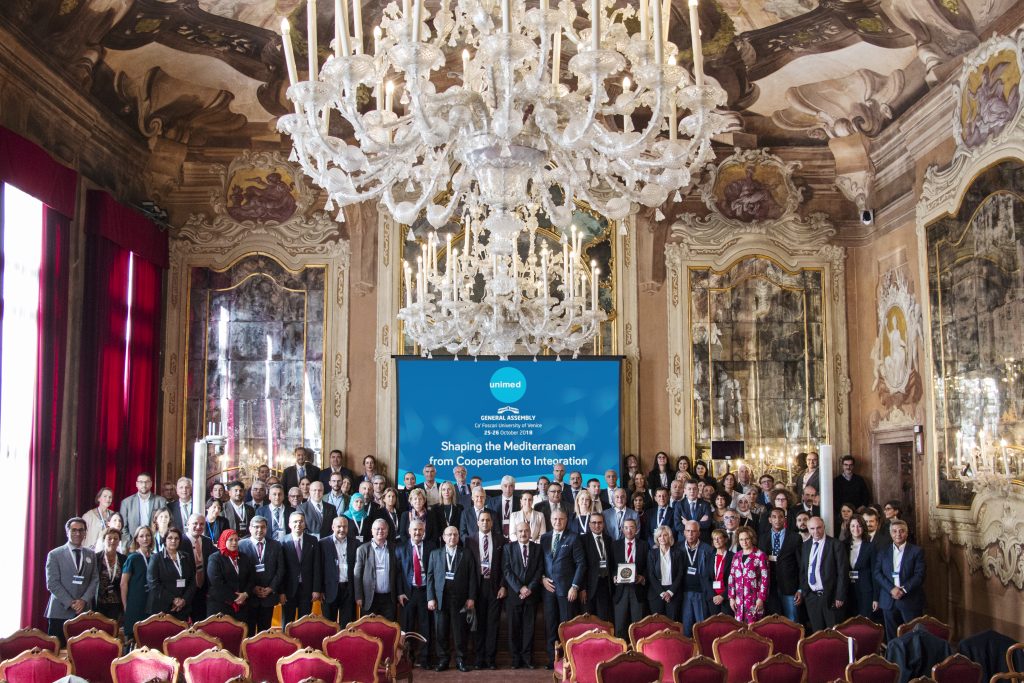 (Rome, 30 NOV 2018) The last UNIMED General Assembly in October 2018, hosted by Ca’ Foscari University of Venice during the celebration of its 150th anniversary, has been a crucial moment for UNIMED as it had to renew its governing bodies and to set the strategic axes of development for the upcoming three-year term Presidency and beyond.

The General Assembly opened its proceedings with the speech by the exiting UNIMED President prof. Wail Benjelloun, who took stock of the achievements of his three-year mandate to suggest future strategic axes of development for the Association and to confirm his willingness to continue his engagement in the Board of Directors. The Director of UNIMED, dr. Marcello Scalisi, in his introductory speech thanked the President and the Secretary General prof. Hmaid Ben Aziza, former Rector of University of Tunis, for their “relentless and precious contribution to the development of UNIMED”, which now has 113 associated Universities and it is involved in 33 cooperation projects, which promotes student and  university staff mobility, university governance and social responsibility, refugees, learning innovation, employability and sustainable development.

On the second day the General Assembly met to discuss strategic issues of the Association and to vote for the renewal of UNIMED’ Boards of Directors, most notably of the President, the two Vice Presidents and the Secretary General.

Professor Francisco Matte Bon, Rector of UNINT (University of International Studies of Rome) was elected as the new President of UNIMED with a mandate until 2021; Professor Hmaid Ben Aziza, former Rector of University of Tunis, was confirmed as Secretary General and the two Vice Presidency were given to the University of Barcelona (Spain) and the University of Holy Spirit of Kaslik (Lebanon). Therefore the newly elected Board of Directors is as follow:

Other Components of the Board:

Besides the statutory activities of the General Assembly, the UNIMED Team showcased the main features of its 33 cooperation projects and it organised also a series of workshops and trainings, open to its associates and external participants, on strategic topics for the future of the Mediterranean integration such as: governance of Higher education Institutions- HEIs, e-learning and open education, sustainable development, employability, among others themes of expertise, fostering integration in the Mediterranean. Eventually it has been a moment to open the dialogue to other organisations working for and in the Mediterranean, and remark the presence of UNIMED as an actor advocating for stronger support of policy makers.