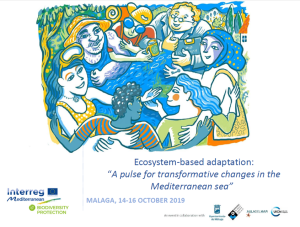 From 14th to 16th October, around 100 participants gathered in Malaga for the final event of the MED Biodiversity Protection Community, a three-day celebration of the results achieved in the last 3 years to promote a more effective protection of the Mediterranean natural resources and to create synergies among the different stakeholders involved.

The PANACeA project, co-funded by the Interreg MED programme, was led by the European Topic Centre of the University of Malaga and counted on a partnership composed by CPMR, Plan Bleu, UNIMED, REC Montenegro, MEDCITIES and the Municipality of Herceg Novi.

During the opening ceremony that took place at the Malaga City Council on October 14, several institutional and political representatives were invited to sign the “Ecosystem-based approaches for Biodiversity protection and management” Declaration, launched in Brussels in December 2018.

Ms. Tatjana Hema from UNEP/MAP and Ronan Uhel from the European Environmental Agency took the floor as keynote speakers. While recognizing the efforts made and the results obtained so far to fight biodiversity loss and climate change consequences in the Mediterranean, they underlined that many challenges still need to be faced and urged the importance of a transformative change in the region.

On October 15, in the morning, three technical sessions were organized to assess the state of the art on biodiversity protection in the Mediterranean. UNIMED coordinated the second session on “Protecting biodiversity while promoting growth; how can it be achieved?”, with the aim of exploring the existing challenges and replicable solutions to make human activities and the protection of natural resources coexist. Some best practises in the field of sustainable development were chosen among the ones developed within other Interreg MED thematic communities or from other projects in which UNIMED is involved.

As an example, Carla Danelutti from IUCN-Mediterranean, representing the modular project DestiMED from the MED Sustainable Tourism Community, promoted ecotourism as an alternative to mass tourism for the Protected Areas, while Prof. Said Boujrouf from the Cadi Ayyad University of Marrakesh, representing EduBioMed project, introduced the case of the Argan oil production in the Moroccan UNESCO-labelled Biosphere Reserve.

In the afternoon, the participants enjoyed the “Mediterranean Optimism Tour”, an interactive journey organised in 5 steps throughout the OMAU-Observatorio de Medio Ambiente Urbano, to get familiar with around 200 institutions working with the Biodiversity Protection Community, to discover the results they achieved in the last 3 years thanks to a collaborative approach and to discuss the way forward.

The last day, organised in the suggestive venue of the Alborania Museum, was devoted to the policy uptake sessions. In three different panels, the speakers debated on the existing political measures and agreed on the need to make fundamental changes in a coordinated way to stop the loss of biodiversity at all levels. During the exchanges with the audience, it was highlighted that, to protect our ecosystems, it is essential to count on the engagement of all the different stakeholders, from the local authorities to the governments, the local fishermen, the private sector, the NGOs and the international organisations, the research and academic field, the MPAs managers and the general public.

A better coordination among these actors has to be encouraged to promote nature conservation in marine protected areas and beyond, regardless of their administrative boundaries and through an ecosystem-based management approach.

More info on the event: