Home / Unimed News / The University of Pisa welcomed Kurdish Universities and the Ministry of Higher Education and Scientific Research to explore possible collaborations between HEIs, local authorities and stakeholders

The University of Pisa welcomed Kurdish Universities and the Ministry of Higher Education and Scientific Research to explore possible collaborations between HEIs, local authorities and stakeholders

On March 15-16-17, 2022, the University of Pisa welcomed representatives from European HEIs, from 8 Kurdish Universities and the Ministry of Higher Education and Scientific Research of the Kurdistan region of Iraq for a three-days of work in the framework of the APPRAIS project.

The conference was opened by a speech from the Rector of the University of Pisa, Professor Paolo Maria Mancarella: “The opportunities to reinforce collaboration and interconnections are essential to deal with future challenges. Only cooperating on a shared framework allows distant countries to become closer. For over 30 years the University of Pisa has been at the forefront of the changes related to the Bologna Process in Europe, pursuing principles of openness to the outside and the global community”. Second speaker of the day was Dr. Mohammed Hussein Ahmed, Director General and Head of the Apparatus of Supervision and Quality Assurance of the MOHESR of the Kurdistan region of Iraq. Dr. Hussein thanked the University of Pisa for the hospitality and welcome, and underlined that Kurdish universities are much looking forward to further collaborations in particular with universities in Italy to learn from their long-lasting experience. Third on stage to open the public conference was Marcello Scalisi, Director of UNIMED, coordinator of the project APPRAIS: “The way to avoid conflict (as it is unbelievably happening in Europe) and support mutual understanding is to improve our relations, working together to define future strategies for international cooperation, listening to each others priorities and responding to common needs and challenges”.

The day was also the occasion to commemorate the deaths occurred due to the chemical attack in Halabja in 1988, during the closing days of the Iran–Iraq War. Professor Mahabad Abdullah, President of the University of Halabja, asked the audience to join the Kurdish colleagues with a minute of silence.

The discussion was then split into two roundtables, the first one was titled Priorities, needs, strategies and challenges for a cooperation framework with Kurdish universities, chaired by Professor Marco Abate, Vice-Rector for Teaching at the University of Pisa. Dr. Hussein opened the discussion with a speech on enhancing the level of quality of the HE system as the top priority for the Kurdish universities: “We look forward to connect with relevant actors at local, national and international level”. The will to enhance the dialogue between universities in the region was reiterated by Marcello Scalisi, who also stated the importance for universities (in Europe and in Kurdistan) to play a role in the global scenario and reinforce the strategic position that Kurdish HEIs may have, becoming more attractive to European colleagues, to international students and showing how strong Kurdish researchers and graduates are. Antonio Mazzeo, President of the Regional Council of Tuscany and President of AICCRE Toscana (the Italian Association for the Council of Municipalities and Regions of Europe) centered his speech on the importance to promote initiatives of mutual knowledge and collaboration, exchanges and twinning, between the local and regional authorities of the different countries of Europe and outside Europe, to try give active support to countries not associated with the EU for socio-economic recovery, the growth and prosperity and to respond also to issues of general interest of these countries such as globalization of the economy, fragility and increasing social inequalities, economic and environmental developments. On the conference panel also the President of Duhok Polytechnic University, Professor Aree Adel Abdulqader who highlighted the fact that the Kurdistan Region is rapidly growing especially from 2014 where the number of institutions has expanded dramatically. Despite the many challenges, Kurdish HEIs fully commit to academic improvement, raise the educational level and participation in international adventures. To conclude the first roundtable was Associate Professor Jesper Eidem from the University of Pisa who praised the Kurdish academics for their activism and collaboration: “After 2004 I was able to come back to Iraq and I was very surprised by the openness, efficacy and competence of the Kurdish colleagues and partners, it is always a great pleasure to work in such environment”.

The second roundtable, titled International cooperation from different perspectives: Municipality, Region and University, was chaired by Professor Francesco Marcelloni, Vice-Rector for international cooperation and relations of the University of Pisa, and started with an opening from Raffaella Bonsangue, Deputy Mayor of Pisa City. Among the priorities for the future, the Deputy Major spoke of co-development as the key for the future,  being international cooperation initiatives an inalienable element of Italy’s foreign policy. “The 2030 Agenda has fundamentally changed the nature of international cooperation initiatives, deeply revising their purely solidarity-based nature, which was essentially based on financial aid, to convert it into a new vision of shared responsibility and programmed commitments for every country in the world”. Second on the floor was Filippo Giabbani from the Council of the Tuscany Region, who highlighted the great tradition of international cooperation of the Tuscany Region, more and more intense in the past 20 years, which granted it the title of the top region in Italy for international collaborations. The recent focus is indeed on the large area of the Mediterranean, including the Middle-East. Last three speakers in the roundtable were: Francesca Zampagni of the Research services Unit of the University of Pisa, who presented the funding opportunities opened by Horizon Europe; Sumodip Sarkar, Vice-Rector for Innovation, Cooperation and Entrepreneurship at the University of Evora who delivered a speech on the relevance for universities to engage in collaborations with firms, local authorities, the municipalities, the private sector, for employability through internationalisation; Professor Ridha Hassan Hussein, President of Sulaymania University presenting the priorities of its university as an example of a starting point for factual collaborations in the Kurdistan region of Iraq.

The APPRAIS Partners took the occasion of the gathering in Pisa also to hold a workshop on the definition of a roadmap for a better university governance and implementation of Bologna process at Kurdish HEIs, and to have the 2nd Partnership Meeting of the project. To follow the developments of the APPRAIS project and keep updated on the project results, visit the project website www.appraisproject.eu and subscribe to the project newsletter. 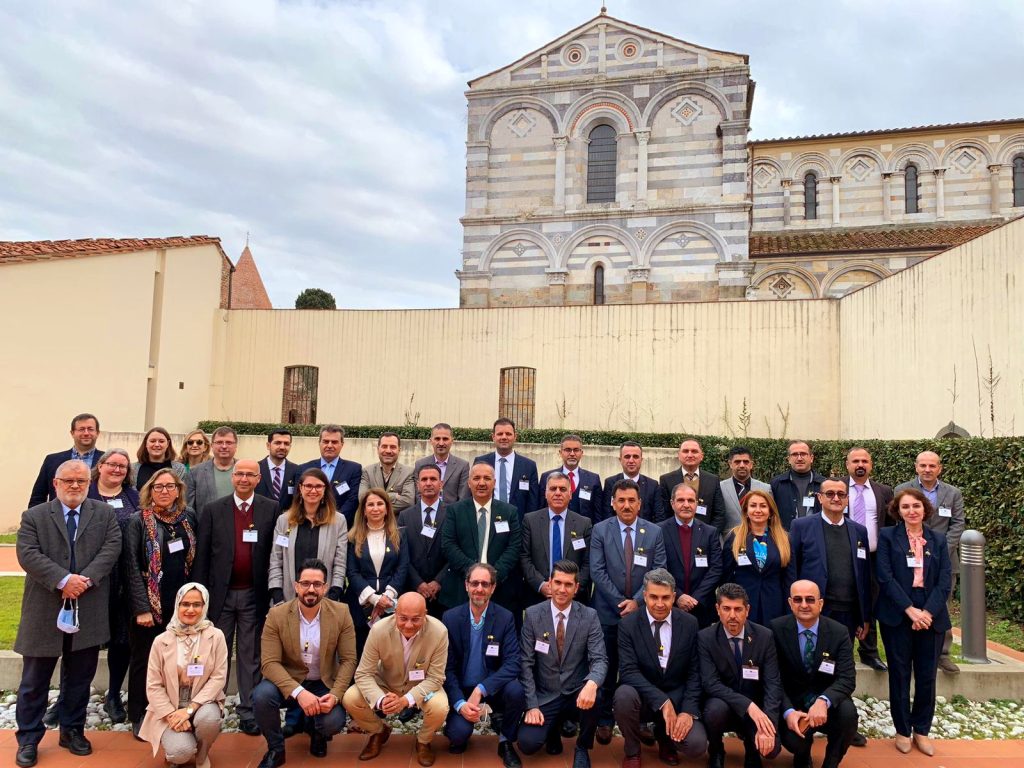 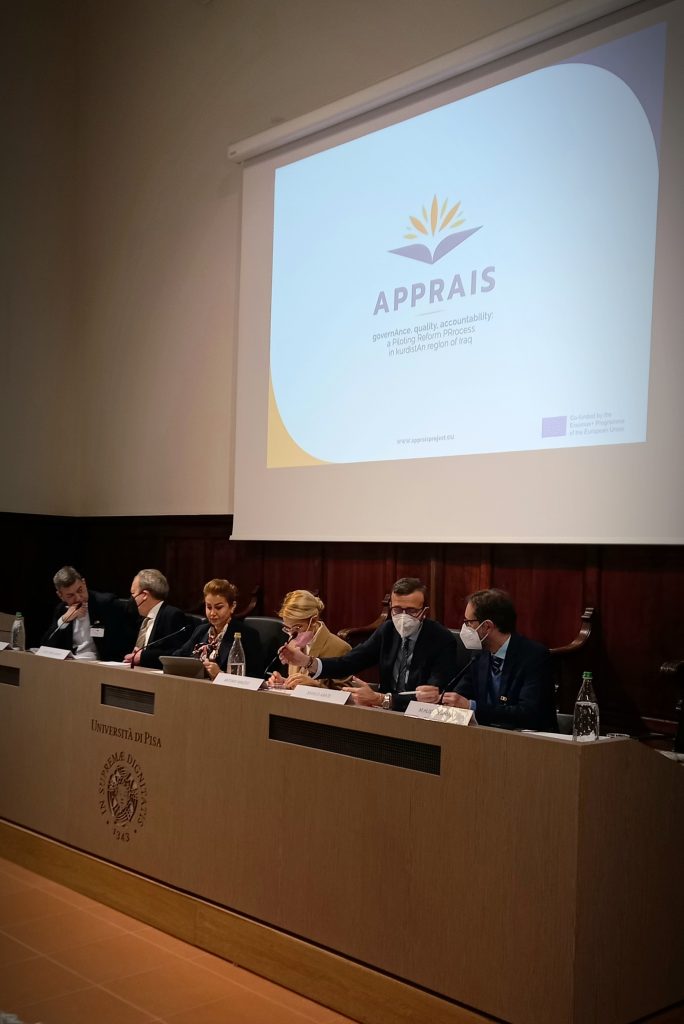 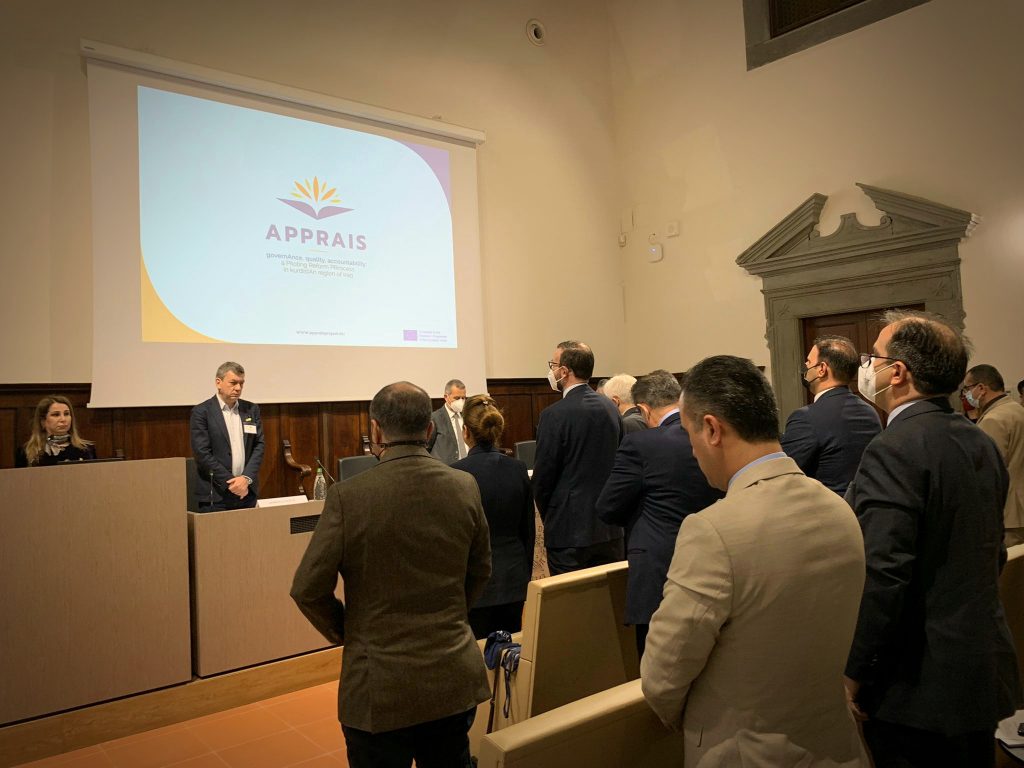