Home / ML-UnimedNews / What perceptions of the Euro-Mediterranean area in Poland? Insights from the presentation and debate of the Anna Lindh Report 2018 // Tampere, 4 June 2019

What perceptions of the Euro-Mediterranean area in Poland? Insights from the presentation and debate of the Anna Lindh Report 2018 // Tampere, 4 June 2019 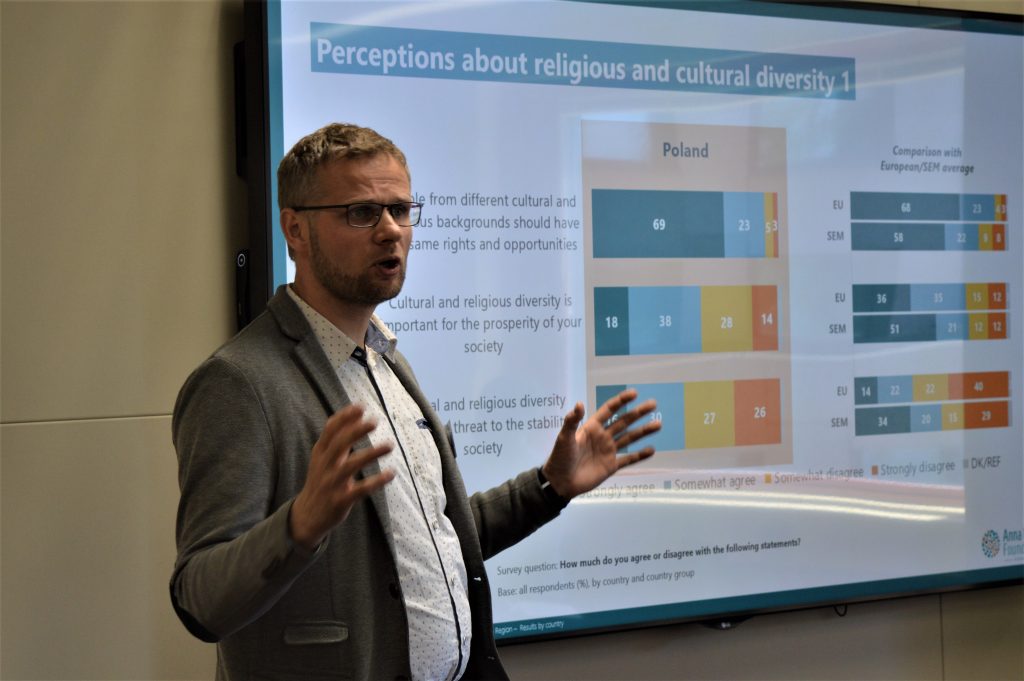 (Rome, 26 June 2019) “Although the results of the cross-cultural encounters are mixed, the Survey confirms that the more intensive is the contact, the more people point out that it has mainly a neutral or positive outcome” explained Professor Konrad Pedziwiatr, professor at Cracow University of Economics and contributor to the Report, on the occasion of his presentation on the results of the “Intercultural trends in the Euro-Mediterranean region” Report 2018 of the Anna Lindh Foundation in Tampere University on 4 June 2019. The event was co-organised by UNIMED, Anna Lindh Foundation, Tampere University and Tampere Peace Research Institute. It featured the participation of Professor Tuomo Melasuo, professor emeritus from the Tampere University, Professor Pedziwiatr and Doctoral candidate Karim Maiche.

The report analyses the Intercultural trends in the Euro-Mediterranean region, featuring the outcomes of a research conducted in Euro-Mediterranean countries. This year’s report was carried out through opinion polls in eight European countries (Austria, Croatia, Finland, France, Italy, Poland, Portugal and the Netherlands) and five Southern and Eastern Mediterranean (SEM) countries/territories (Algeria, Israel, Jordan, Occupied Palestinian Territories and Tunisia).

This analysis investigates the trends in the perceptions within the region, particularly after the impact of conflicts, as well as in the broader context of globalization and immigration. It provides recommendations focusing on those areas which could bridge the gap in mutual perceptions, including education, culture and the media, as well as the creation of an instrument to measure the evolving values and attitudes of people in the Region, in accordance with the Groupe des Sages reflections.

In the framework of UNIMED and ALF cooperation, this document, released in 2018, had already been presented in Rhodes, Tunis, Rome and Amman. It was recently therefore also presented in Tampere. This event was not only an occasion to disseminate the results of the report but also an opportunity to foster debate between academia, civil society and experts.

The presentation of Professor Pedziwiatr focused on one of the countries where such poll has been undertaken, namely the intercultural trends and social change in Poland. He shared some valuable insights related to values and perception of gender equality, representation of the Mediterranean region, interaction and dialogue, living together in multi-cultural environments, and gains from Euro-Mediterranean cooperation. You can access his presentation here.

In Poland, the Mediterranean region echoes a certain “way of life and food”, “hospitality” and a “common cultural heritage and history”, according to the survey. However, it has been identified that “there is very limited interests amongst the Poles in news and information about political and economic situation in the SEM region”, a “disinterest [which] is mutual”.

Overall, the benefits from Euro-Med cooperation were not considered as substantial by the Poles, which is explained as much by the country’s geographical and geopolitical position as by “the national populist turn taking place over the last years in the Polish society and political decisions to scale down some of the European and Euro-Med partnerships” according to Professor Pedziwiatr. Now more than never, “the work that the Anna Lindh Foundation has been conducting over the last years is becoming more and more important in this changing world”, as Mister Karim Maiche, a doctoral candidate of the University of Tampere, contributing to the panel discussion, stressed.

Build encounters through online media was highlighted as particularly important by the panelists. On those words, it is worth noting that the Anna Lindh Foundation is partner, together with UNIMED, in the Erasmus+ Virtual Exchanges programmes which contribute to such multi cultural exchanges.

Professor Tuomo Melasuo also contributed to the debate by presenting the many opportunities in that regard. For example, he stressed the importance of the Tampere University programmes such as the one on media and journalism (the University will for that matter coordinate UNIMED’s SubNetwork on Journalism). Professor Melasuo also mentioned the success of the joint professional master course in Cross-Media journalism in the framework of the Tempus eMEDia project bringing together 3 European universities (Milan, Barcelona and Tampere) and 3 Tunisian Universities (Sousse, Sfax and the Institut de Presse et des Sciences de l’information).

The full recording of the event is available here.